Alison was born in Chichester, Sussex, and moved to the Isle of Wight with her parents whilst still at school.  Having completed her senior schooling on the island, she  spent the time indulging herself in various pursuits, including visiting Norway and picking strawberries!  Returning to the Isle of Wight, she took up employment at the Osborne House guesthouse.  Having a good ear for music and having sung in school choirs and the like, she invested in her first guitar and set about teaching herself to play it.   The fact that she was left-handed made her approach somewhat unorthodox.

After a time, Alison moved to London where she took up a secretarial position.   In the hope of refining her rudimentary guitar skills, she decided to take formal guitar lessons and quickly found that being a left-handed player brought with it some challenges!    As Alison recalls, she became frustrated “because my strings were upside-down and everything was the round the wrong way!”  Realising that her preferred guitar playing style, and her guitar teacher’s desire to turn her into a right-handed player, were incompatible the lessons ended and she continued on her chosen path.  By now Alison was building up a repertoire of popular folk artists of the day, from Joan Baez to Leonard Cohen, John Denver and Bob Dylan.

In 1971, with the encouragement of a London housemate, Alison boarded an ocean liner at Southampton and set sail for South Africa.  During the course of this journey she met a fellow passenger, himself an aspiring guitar player, who was from Bulawayo in Rhodesia.   They jammed together on the trip which eventually led, after spending three months in Cape Town post her arrival from the UK, to her relocating to Bulawayo,  After a short stay in Bulawayo she proceeded to Salisbury where she had family contacts and found gainful employment. 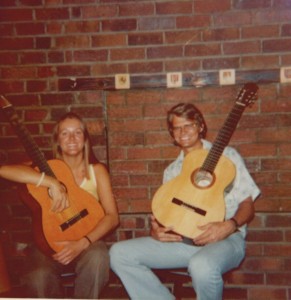 After an enjoyable time in Salisbury, and having fallen in love with the charm and the  “Africanness and Englishness” of Rhodesia,  wanderlust returned and she decided, primarily for family reasons, to move on.  Meandering northwards, Alison found herself in Ethiopia in 1973.  From there she travelled to Kyrenia in Cyprus where she secured herself regular gigs in local restaurants.  The money she made from these gigs became a small but nevertheless reliable source of income that summer.  She recalls that the local tradition seemed to be for appreciative audience members to shove rolled up notes between the guitar strings and into the guitar hole.  On returning to her temporary digs at night she’d shake the notes out of her guitar, feverishly unrolling them to see how much she had to live on for the next day or two!

After a short time in Cyprus, Alison found herself back in London.  It was late 1973 and she was set up in a comfortable house in Chelsea.  Her peace, however, was soon shattered – literally!  One evening, minutes after arriving home by foot, a bomb planted by the IRA exploded two doors down from her home.  The force of the detonation blew the front door off her residence.  The bomb, one of three which exploded in Chelsea that evening suggested to her that, despite the expanding bush war, Rhodesia was probably a safer place to be!

Back in Salisbury Alison worked at various companies, Phillip’s Central Cellars, Edwards & Co Stockbrokers and Anglo American.  It was from her work in the public relations department of Anglo that C G Tracey asked Alison to become involved with a very big conference to be held in the new Zimbabwe in 1980.  And it was from this conference that she began organising conferences which would decide her career for the next thirty years, both within Zimbabwe and the SADC region as a whole.

It was in 1975 that she became involved in the Beverley Rocks folk scene and became a regular performer at these gatherings.  As a result she became friendly with many stalwarts of the Rhodie music scene, including Clem and Jean Tholet and Paddy Rocks.  For a while Alison was partnered as a duo by a visiting American Greg Skiba who, coincidentally, bore an uncanny likeness to John Denver!

One of Alison’s favourite recollections of this period relates to a weekend when the club were asked to travel to the Vumba to perform over a weekend.  The performance would be for the troopies who were based in that area and an effort to boost twindling tourism.  With a large contingent of folk club members present, the function was held at the Leopard Rock hotel before a packed house of troopies with the hotel foyer piled high with weaponry.  With a smile on her face, Alison wonders what might have happened had the hotel been attacked that night as none of the troopies present was anywhere near his weapon!

In 1977,  whilst convalescing at home after a bout of flu, Alison propped herself and wrote a song which would become her hallmark – Bushwallah.  It was after performing the song one Sunday evening at the folk club that Clem Tholet asked Alison if his advertising agency could make use of it in an anti-emigration campaign that was being launched.  At that time, people were leaving the country in droves and, in response to the deteriorating situation, the Government had enlisted Clem’s agency, Matthewman, Banks and Tholet, to create a publicity campaign in a bid to reverse this disturbing trend.

Alison was obviously flattered at this request and immediately gave it her blessing.  Her heart sank, however, when Clem told her the song would need to be recorded professionally and that a man’s voice would be preferable.   The latter suggestion was, however, revoked and so it was that she arrived at the recording studios, guitar in hand, to make her first recording.  Then came another surprise – she wouldn’t be needing her guitar either since the backing had been pre-recorded.  She duly recorded her version of the hauntingly beautiful song she had penned on her sick bed.  To this day she has no idea who the musicians were who had recorded the backing track.

Alison recorded a second self-penned song at these sessions, The Eagles, which became the ‘B’ side to Bushwallah.  This song had been written on a visit to Kyle dam and was shortened for the purposes of the recording. 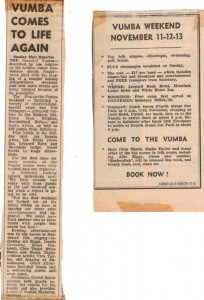 Clips from the chorus of Bushwallah were subsequently used in the anti-emigration campaign’s publicity campaign, including on television.  Alison felt honoured and humbled that her modest song had been recorded and chosen for such exposure.  The song was duly released as a 7” single, however, it only enjoyed very modest sales and, somewhat surprisingly, never became a hit as such.  The song resurfaced when it was included on the popular Rhodie CD, Rhodesia Was Super, and Alison’s name came to the fore once again.

Alison remained in Rhodesia through the transition to Zimbabwe and, in 1987, married Christopher Notley, a British army officer who had been seconded to Zimbabwe with BMATT.  In 2002 Alison and Christopher decided to relocate from Zimbabwe to Villiersdorp in the Western Cape, South Africa, where they have established one of the first alpaca breeding farms in the country.  You can get an insight into their lives, and learn all about these wonderful animals, at their website at:  www.helderstroomalpacas.co.za

The good news is that, whilst no longer active on the local music scene, Alison still produces her guitar on the rare occasion for family and friends and no doubt reminds them all of what it is to be a Bushwallah.