BEDROCK (The Band In The Sand) was originally formed in Oranjemund, Namibia, in 1994.  There were two Rhodie/Zim musicians in this line-up in the shape of Bulawayo product, Pete Shout (bass guitar, backing vocals), and Fort Victoria prodigy, Charles Piggott (lead vocals and lead/rhythm guitar). They were later joined by another Salisbury talent, Jenny Malherbe (nee Sharp), on lead vocals.  Over the subsequent 20 years, the band established itself amongst Namibia’s leading rock acts and won many accolades during that time.  Although the band played covers in their live sets, their real motivation was original material, the first of which received its first exposure with their 2001 CD release, RECOVERY. A further five albums of original material followed that original release and the band enjoyed regular airplay on Namibian radio stations.

The opening track on their first album, Rock ‘n’ Roll Man, penned by the band’s lead guitarist, Kenny Ramage, charted in the South African Rock Digest’s Top 20.  It was also selected as one of the Top 30 South African productions for 2003.  Crowd Invasion, off their second album, So, Where’s The Party?, also made the SA Rock Digest Top 20 charts.

Due to their geographical isolation physical from  urban centres, they were early adopters of music-related technologies and led the way in many of these initiatives.  This more than compensated for their isolation and gave them access to audiences they would not have been able to reach through any other means.   Despite being part-timers, they pursued their objectives with professional zeal and gained the respect of their peers, contemporaries and supporters wherever they appeared or interacted.  Throughout these years the band was anchored by two of the founding members, Pete Shout and Eddie Heusdens (drums and percussion).

In 2015, the band dissolved when founding member, Pete Shout, took his leave of Namibia and relocated to Cape Town.  The band’s music continue to be popular, however, and in 2016, the band’s 2008 album,  SIMPLICITY, was re-released.. 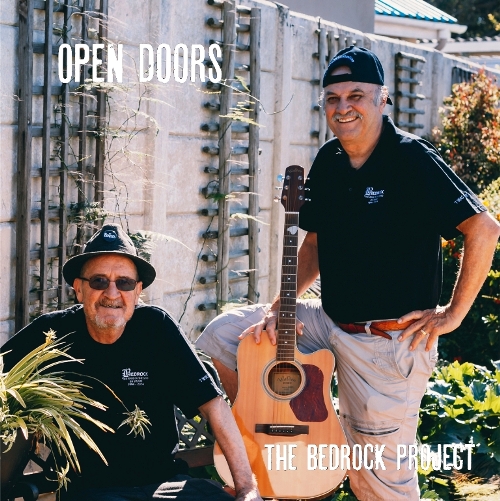 During the course of 2017, another of the band’s stalwarts, guitarist, singer and songwriter, Kenny Ramage, joined Pete to produce a seven-track EP called OPEN DOORS.  The album has all the usual elements of BEDROCK songs – a variety of humour, driving rock, some country, reggae, a romantic ballad and a good old dose of silliness in The Silly Song.  Give it a listen – and enjoy!

Since then, Kenny Ramage has relocated to Northern Ireland.

Pete Shout continues to work on fresh projects in Cape Town. Pete Krog, another of the band’s founder members, may be seen performing in Mauritius, where he lives, with the much-in-demand local band, Wave Kerosene, and ertshwhile guitarist, John Rogers, is a prolific songwriter and performer in Cape Town.  His material may be fond under his DAGADOON project on Facebook and elsewhere.

If you would like to learn more about Bedrock’s fascinating journey, please visit their main website at: www.bedrockband.com

The band’s full catalogue is available for streaming or purchase via all popular digital platforms, including iTunes, Napster, Rhapsody and Spotify.

You can also buy track downloads on-line through the band’s Facebook Music Store or from www.cdbaby.com or www.bedrockband.com 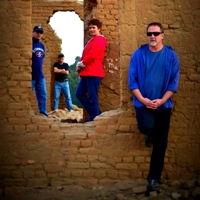