Cold Shoulder was shaped from the ashes of the BELIEVERS, a local Gospel group led by DON FOSTER.  Their first gig was at the Montgomery Hall in Kingsdale and, in the words of one of the band members, “a huge crowd turned up, outnumbering the band, according to some estimates!”.  But, eighteen months of toil and dedication saw the band aspire to the lofty heights of the ‘Talk Of The Town’ stage, the pinnacle 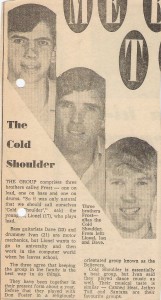 of their success.  In the intervening months they had built up a reputation by playing at school leavers’ dances, TTC pyjama parties and Texan Rock Band contests.  One one occasion they even played a very rare gig at the Lido Hotel.

The band never owned their own organ, so had to fetch and carry a monster Gulbransen organ whenever they gigged.  For this reason they fancied playing shared gigs because it meant the convenience of borrowing equipment – especially the organ!  On one such occasion they shared a platform with HARM’S WAY at the Harker Hall.

The band were never daunted by complex material and even set about doing Santana covers as a trio – how’s that for “stretch”?  The band thought they were onto something really big when they were invited to participate in one of Giga’s Woodstock Promotion events at the Bulawayo showgrounds.  There was great excitement in the air as the headline act was the amazing South African group, OMEGA LIMITED. To the Frost brothers, the names of COLD SHOULDER and OMEGA LIMITED just rolled off the tongue and they went for broke (that is, hoping to “sell” themselves to OMEGA LIMITED as a more-than-adequate support touring band) by laying a KING CRIMSON cover – “20th Century Schizoid Man” – on them.  Sadly, COLD SHOULDER are still “waiting for their call!”.

With heavy hearts, COLD SHOULDER disbanded in 1972 when Lionel Frost commenced studies at the University of Cape Town.  Ivan Frost went on to play with CLASSIC FOUR (replacing PETER PRICE) for a time before also leaving the country.

Today, all three brothers reside in Australia where they are still engaged in musical pursuits of one kind or another.  COLD SHOULDER even re-grouped for a one-off gig at a pub night in Fitzroy, Melbourne, in 1991.  And just to complete history, on this occasion the band went out as they originally come in – with the band outnumbering the crowd!