The brainchild of lead guitarist, Rob Taylor, the Frets Ltd were born on the crest of the Beatles’ wave of success.  At the time all the band’s members were scholars at Churchill School in Salisbury’s Eastlea suburb.  With Rob being the only band member with something of a musical background, they took their first tentative steps as the FOUR FRETS making their 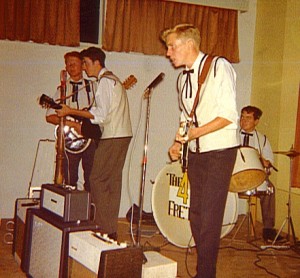 debut at the Portland Cement Club in 1965.  This gig was followed by others at school functions at Churchill and Roosevelt, as well as house gigs in the Greendale area.  As the band gained experience and confidence they started to look beyond their local boundaries, procuring the spot as resident band at the Highlands Country Club.

In due course the band appeared at the Rhodesville Catholic Church’s “Youth Evenings” and went on to play throughout Mashonaland, boasting appearances at places such as Bindura, Sinoia, Wedza, Trelawney and Inyanga.  Many of these gigs were hosted inside tobacco barns “Just to add”, in Steve’s Bailey’s words, “to the flavour!”.    As they made their way their name evolved from the FOUR FRETS to FRETS LTD.  One of the key ingredients underpinning the band’s progress was the outstanding logistical support they received from noted “drinks managers” such as Irven Ridler, Peter Southworth, Paul Conway and Richard Broadrick.  It was well known at the time that the high Mashonaland temperatures could cause dehydration and copious liquid intake was essential to carry off successful gigs without flagging! 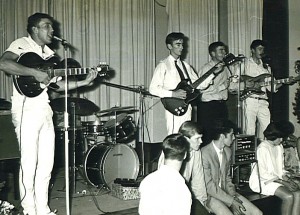 During this period the band became aware of the Fuzz Box and, fascinated by the effects it produced, set about procuring one for themselves.  This was achieved through the technical skills and knowledge of a friend, Paul Conway, who worked at the Post Office as an electronics technician.  Initially the band ran the bass guitar through it before doing the same with the lead and, in a short while, it became the latest gizmo on the local music scene.  In the absence of any conflicting evidence, the band can probably lay claim to being the first Rhodesian band to use this technology.

Inevitably military call-ups started to disrupt the band’s activities and Rob Taylor made way to “IT” Thomas and John Lester was replaced by Nick Winnell.  Steve Bailey was replaced by John “Tubby” Williams.  Despite these changes, the band remained loyal to Churchill ensuring that all successors came from that fine institution! 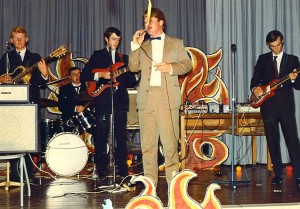 Church Hall and discovered drugs – believed to be dagga – on the premises.  The incident made the national media but, thankfully, the band emerged unscathed!

The band’s members also look back upon their gigs at the Mazoe Hotel on Sunday afternoons with fondness, especially the cornish pasties which always guaranteed the “squirts” the following day!

The band soon found themselves on the “serious” music circuit playing on Saturdays at the Discotheque in Union Avenue supporting visiting artists such as Gene Rockwell and Little Joe.  On one occasion, Bennie Miller, who had just returned from overseas did an impromptu performance with the band which left them all totally stunned by his prowess. 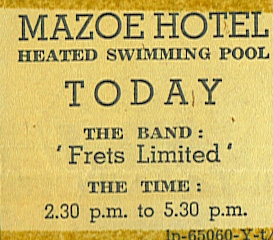 By this time military call-ups had become so frequent that the band’s members constantly “chopped and changed” and the forward momentum was terminally disrupted.  Among those who did manage to stick around for a while was Hillary Thackwell on vocals.

Their biggest rip-off occurred when a very articulate and dapper gentlemen promised them a gig to a full house at the Hellenic Club – the thought of a full house of profits being shared sold the band on the idea immediately.  Only problem was that when they pitched for the gig the venue management never knew a thing about it so, in one instant, their vision of a packed hall was reduced – literally – to an empty one!!

Beset by all these interruptions to the line-up and ensuing lack of continuity, the band formally disbanded in 1968.

In the intervening years Barry Nadin died in Zimbabwe in 1986. 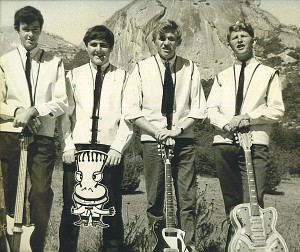 “Tubby” Williams went on to sing opera and now lives in the United Kingdom, as do Rob Taylor and Paul Conway.

“IT” Thomas is around!

Pete Southworth is retired in South Africa after a very successful in the banking world.

Irven Ridler resides in Cape Town’s Table View suburb where he has a private pub full of FRETS LTD momentos and memories. 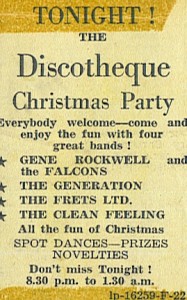 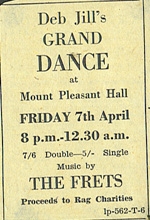