LINCOLN was the name change adopted by the very successful Bulawayo band, the SILHOUETTES.  Adding Rudi Gouma to the team, they relocated to South Africa in 1970 spurred on by MIKE WESTCOTT to take this step.   Making the move in 1971, the band spent its first three months in Pretoria.  Shortly after arriving in South Africa they signed up with prominent local producer, Terry Dempsey.  Dempsey soon arranged for them to record a single, “Long Days And Lonely Nights”, penned by Patrick van Blerk.  It was duly released on Dempsey’s MAP Records label.

The single raced into the charts peaking at No 2 where it paused after failing to dislodge Sweet’s “Funny, Funny” from the top spot.  Nevertheless, “Long Days…” hung about the top of the charts for nine weeks, very definitely establishing the band on the local music scene.

In May 1971 the band took up a 6-month residency at the Holiday Inn in Maseru and, during their time there, recorded a second single for Dempsey entitled “Everlasting Faith”.  Released again on his MAP Records label, the song failed to attract the buying public’s enthusiasm to the extent that “Long Days And Lonely Nights” had.

Whilst at Maseru, the band were offered a three month gig at Le Coq D’Or in Salisbury, Rhodesia’s capital city.

The band accepted this gig and appeared at this renowned Salisbury entertainment spot for 6 months, from November 1971.  Having completed this chapter, the band moved on to a residency at 55 Bar at the Skyline Hotel in Hillbrow from December 1971 – June 1972.

These were the days of great energy, hope and promise as the band continued to ply their trade in their search for the really “big break”.  It was a time which saw Terry Dempsey approach the band with a song he had written called “Daydreamer”.  He arranged for the band, backed by the Johannesburg Pop Orchestra, to record the song.

It was during this period that Butch Cook, encouraged by Dempsey, was developing his own song writing skills.   He penned significant songs with promise, one of which was called “Mary Joe”.  The song was later produced by Dave McKay, the internationally respected producer associated with successful international artists and acts such as the Seekers and Cliff Richard.  After having assessed the potential of “Mary Joe”, McKay suggested that it be taken to the Hollies who he believed would be the ideal band to perform the song.  Unfortunately, and for whatever reason, this never happened.

In due course, Terry Dempsey attended the Tokyo Song Festival with “Daydreamer” amongst his portfolio.  At the festival he was approached by David Cassidy’s manager who sought permission for Cassidy to cover the song.  This was agreed to and the rest, as they say, is history.  “Daydreamer” turned into a multi-million dollar success for Cassidy.  Meanwhile, the Lincoln version has never seen the light of the day.    Shortly after this Lincoln’s contract with Terry Dempsey came to an end and the band moved on to new pastures.

In 1978, whilst gigging at Gambits in Pretoria, the band were asked to record a song called “Everlasting Love” (not the Steve Ellis/ Love Affair release of the same name!) by an A&R representative from EMI.  The band leapt at the opportunity to re-establish themselves on the local scene but again, after recording the song, industry disagreements and conflicts between recording companies, producers and radio stations ensured that it was never released. 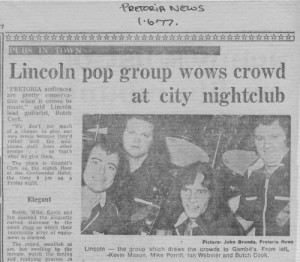 In 1975 the band were once again “homeward bound” as they completed a season at Bulawayo’s “Talk Of The Town” night club.  This period saw a split in the band as it was known.  Jack Thain and Rudi Gouma had understandably become disillusioned with the industry.  Part-time/relief bassist, Jock Cameron, also decided that he had more important priorities in life.  Butch Cook and Ian Webster returned to South Africa.

It was a difficult period for Butch Cook who was determined to keep the band going.  His desire was further under-pinned by the fact that the band had an outstanding season at the Palm Grove in Margate to fulfill.  Against this background, Butch had the sadness of his father’s passing to contend with.  With a determination to prevail, the interruptions to the band’s line-up were quickly repaired and the “new” group comprised:

Repaired, re-invigorated and committed, Lincoln completed their residency at the Palm Grove before proceeding to the Blue Angel in Durban’s Mayfair Hotel.  This gig was followed by a season at East London’s Windsor Hotel, followed by the Lonsdale.  It was whilst at the Lonsdale that Trevor Ellis took his leave, being replaced by Mike Porrill in 1978.  The band continued to follow their fortunes at Gambits in Pretoria and in venues in Maritzburg.  In 1980, jaded and unable to achieve the success they so badly strived for, Butch Cook decided to “call it a day”.  With this, the band dissolved and the members went their respective ways.  Kevin Mason and Ian Webster, however, decided to “keep at it” and continued at Belle a Napoli in Johannesburg as the band BYTE.  Shaun Potts carried the vocal duties in this line-up. In 1983 Ian and Kevin left the band and settled in Durban where they opened a music shop and recording studio, Coastal Music, which is still in existence. 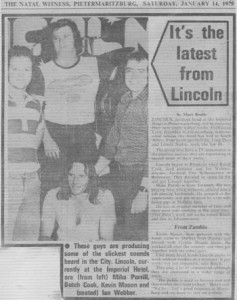 (See also the SILHOUETTES under “Bands” and BUTCH COOK under “In The Tradition” pages). 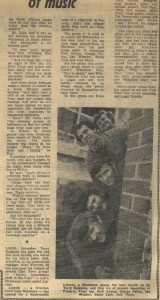