After leaving Guinea Fowl school and completing a nine month sting in the Army, Rod Kopman and Tony Whitaker-Wilson formed the LIVIN’ END.  The band played regularly at all the main local clubs including the Discotheque (below the Rhodes Cinema), Bretts, La Boheme and Le Coq d’Or.  They were also the resident band on one of Martin Locke’s Rhodesian Television music shows.  Another venue which saw The Livin’ End perform regularly was the Mazoe Hotel and the band even played in Beira at the Estoral Hotel and the Railway Club.  The band eventually took up residence at the Park Lane Hotel. 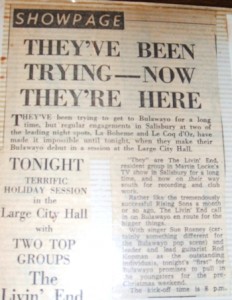