Nick’s passion for drumming manifested itself at an early age when, as a youngster in Salisbury, he armed himself with a 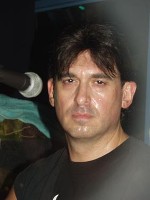 pair of coat hangers and started belting the hell out of his mother’s cake tins!!  As far as he can recall, this demonstration followed a television programme in which he saw footage of Buddy Rich.  Such was his determination that he literally built his first drum kit, including the pedals and all the frills.  With a set of headphones on his head he would try to emulate the drummers of his favourite bands of the day, including Deep Purple, Led Zep, Yes, Genesis, Kansas and Wishbone Ash.  His mother tried to divert this interest to violin but gave it up after two years as a bad job.  Nick would come home and immediately get back to practicing…on the drumkit!

His first band was ANTIOCH (see BANDS) which he formed with a bunch of mates, none of whom had received any formal music training or education.  After this band dissolved, he moved to Johannesburg and joined TANGIER (1979 – 1982) along with Carol Welsh on vocals, Martin Yeats on bass and vocals, Jorge Arrigone on guitar, vocals and keyboards.  TANGIER gigged the local Johannesburg circuit in the main.  One of their more notable achievements was winning the Casio Battle Of The Bands competition in 1981.

In 1983 Nick joined the band which was to enjoy the greatest acclaim of his career , the Helicopters.  The rest of its members were Bernard Binns (vocals and guitars), Paul Hughes (guitar and vocals), Alistair Broadhead/Bert Askes (bass) and Jon Mason (keyboards).  The Helicopters quickly established themselves at the very top of South Africa’s rock music pile and appeared on television on at least forty occasions and had five No 1 hits on the South African charts.   In addition to this, they recorded four albums and as SA’s white rock act of the 80’s the were pretty much second only to Rabbitt in terms of success.  They headlined several major tours and filled venues such as Cape Town’s Good Hope Centre.  And the band lived the rock lifestyle to the full, indulging in the full array of antics from destroying hotel rooms, getting drenched with fire extinguishers on stage, drum risers falling over during performances and dealing with stage bombs exploding in their faces!  All good things come to an end they say, and so it was that the band called it quits in 1990 after a phenomenally successful tenure.

Nick, however, wasn’t about to stop playing and did session work, and toured, with acts such as Steve Hofmeyr and Patricia Lewis.  In 1990 he joined Flash Harry with Keith Bereal and Dieter Enderling.  This was followed by a couple of years with Carte Blanche (not the television programme!) and Stryder.  It was with the Diamond Dogs that he was to again get a taste of high profile success.  The band produced two commercial hit records and enjoyed plenty of radio and television exposure.  Highlights were backing Jethro Tull on their tour of South Africa and meeting Bruce Springsteen.

Nick’s time with the Dogs ended in 2002 and he then found himself with Jump Start who, as he describes it, morphed with Red Flash.  The band are still active and are a favourite at bike rallies.