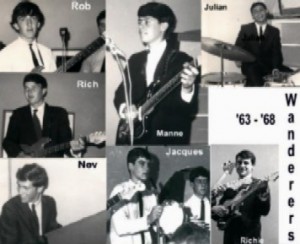 The Wanderers played in clubs and at countless school dances and rock sessions and Salisbury and surrounding areas.  The band had regular gigs at Bretts and the Discotheque (under the Rhodes Cinema).  They were known for their covers of Beatle numbers and cut an LP in 1964.

Among the band’s most fondly remembered bookings were dances at the University, the Polytech, Gwebi College, the Mazoe Sailing Club,  Air Force functions, as well as variety shows and TV appearances.

The band broke up in 1968 as its members left to pursue their studies.  They are now in South Africa, the UK and the USA.